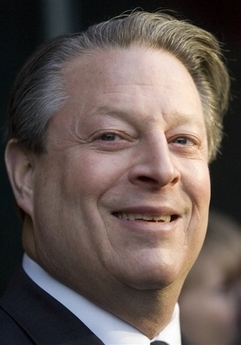 All frauds are uncovered in the end.  With a little common sense you can look into this fellows eyes and see him reveling in his own temporary accomplishment of buffalo’ing a large portion of the public.  But remember global warming is a fraud that will eventually be uncovered.  Its not like the weather is some big secret.  Its only a matter of time before this face is looked back upon by history as the quintessential Wrong-Way-Corrigan of our time.  Wrong-Way-Corrigan had it all over Gore.  Corrigan did what he did to cut through government red tape.  Gore does it either to feed his ego or he’s dumb enough to believe.  Probably both.

Let it be a lesson for you and me on how not to ply our existance on this planet.  Genuine people get genuine results.  Disingenuious find themselves lost like Al Gore. Unable to find a compass within himself to find his own direction he clutches onto whatever supplies his narcissistic feed.

If he were really smart enough to be an authority on scientific topics he would not have been a politician. He would have been a scientist or engineer.  Only by being one of these can you know the joy that is the truth of nature’s laws. These truth’s that are in such short supply in the world of man.

Just keep in mind the people like this guy are made everyday.  Confidence men are a dime a dozen.  When global warming is proven false there will be yet another story rolling down the pike right behind the global warming one to replace.  Learn now while you can so next time we won’t have to listen to all this malarky.   I know….you say fat chance…..America has just too far gone in the dimension of neurosis.  I have to agree.

Research Links Least Squares Parabola Fit to Data The least-squares parabola uses a second degree curve to approximate the given set of data, , , …,   where N>=3.  The best fitting curve f(x) has the least square error, That Read more…

PDF: BIS Papers No 107 Impending arrival – a sequel to the survey on central bank digital currency

Memoirs of Extraordinary Popular Delusions and the Madness of Crowds