There are skilled people and there are stupid people.  These are people who do good and people who do harm.  Whether this is due to a malignant nature or due to plain simple stupidity is not the topic of discussion here. Societies thrive on the fruits of labor from people who are skilled.  Empires fall because people lacking the skills to build can only destroy.  And you know its much easier to destroy than build.

Destruction is probably just as much work for the person doing it as building.  In reality we fill our lives with whatever we fill them with.  I assume that the vandals of this earth are just as busy as I am contructing……However due to the principle that here are only a few ways for things to function correctly and a vast multiplicity of ways for things to go wrong its easy to see that the requisite skills for destruction are WAY less.

Somewhat orthogonal to this dimension of skill is motivational drive inherent in a person.

With that we have the 2 axis of a graph defined.

If you want to optimize your outcomes you can look at the problem as one of limiting damage.  The most damaging quadrant is the High Motivation / Low Skill – Ted Kennedy Dumb Quadrant. 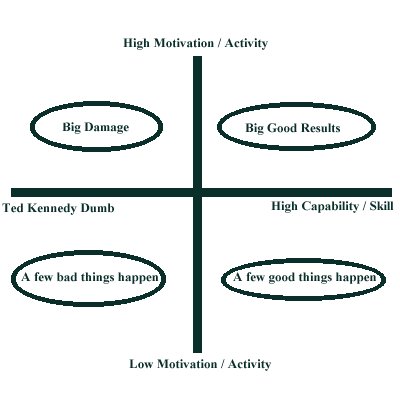 If you want to optimize results you can look at the problem as being one of loss minimization.   The worst quadrant the the Teddy Kennedy Quadrant.  The one where the person is stupid and motivated.   It could just have easily been called the Al Gore Quadrant.  This is where the person has only passing coincidence with capability.  They go about with all their energies trying to do something end in the end all they do is end up screwing things up worse than they already are.

……The mental picture here should be a very energetic but poorly skilled brain surgeon.  Not someone you should let anywhere near an operating room.  This is the Global Warming Crowd.  Only the stupid highly motivated could take this imaginary problem on.   It takes some true faith to champion a confabulated cause such as this. I speak here of the ones NOT getting paid.  The suckers who are true believers.  Regarding the Fear Factory Workers, the researchers that feed on the ever growing revenues government sinks into this that is a different question.

The high skilled, low motivated you simply try to motivate with all the standard tools and if they do not take the bait you let them rot.  These are typically your passive aggressives that want to sit back and watch everyone else work !

Finally there are the highly skilled, highly motivated.  What to do for these people ?   Get the f#%k out of their way !   That means you democrats!

This is how it has been through all of human history.  Now we are entering an era of human endeavor where nothing is going to be forgotten.  Crude feedback systems such as the one used by eBay are rating peoples behavior.  Lets see what happens !   I can see where there is possibly going to be less and less you can get away with.  By limiting who we choose to do the important jobs and by limiting compensation for those who do not perform we can both motivate and optimize those who do the most important job in society, which is make it run.