The U.S.S. Independence was launched last month. Built by General Dynamics at AUSTAL Shipbuilding in Mobile, Al., it’s called a "littoral combat ship" (LCS), and the tri-maran can move huge weapons around faster than any ship in the Navy.
Littoral means close to shore, and that’s where these fleet-hulled babies will operate, tailor-made for launching helicopters and armored vehicles, sweeping mines and firing all manner of torpedoes, missiles and machine guns.
These ships were designed to be relatively inexpensive this one’s a bargain at $208 million and the navy plans to build 55 of them.  This tri-maran is the first of the new fire-breathing breed, ready to scoot out of dry dock at a rumored 60 knots.. It’s like a speedy and heavily-armed aircraft carrier for helicopters.

Looking at the photos below the ship shows heavy resemblance to the first generation stealth fighter.  That is because it is designed to be stealth.  Its flat sides will reflect the microwave energy like a mirror.  As you know with a mirror and a flashlight you have to be directly in front of the mirror with its surface pointed directly at your or you will not see the flashlight if you are a long distance away from it.  What will happen for example when another ship sends outs a radar pulse it will be reflected up into the sky instead of returning to the radar transceiver. 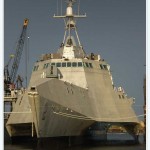 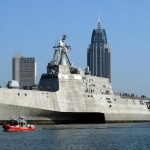 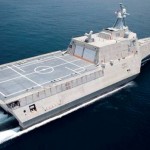 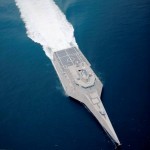 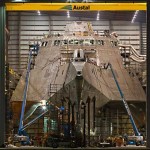 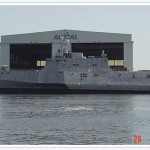