It looks like your nutjob Global warming sham is going to end up pulling at least a partial con off.

Its time you citizens ( non-engineers) understand a few simple facts and are given the logical conclusion which is an upper cut into the face of global warming.

The only way possible for this tree to not yield up every last bit of its carbon in the form of CO2 at the end of its life in any sort of long term window is if its buried under the ground and is formed over extremely long time intervals into coal.  The conditions have not been right for this for quite some time.  Conclusion?  Trees do not affect CO2 levels.

Now if you have any sort of an engineering mind you should have a very obvious question in your mind right now.

Give up ? Ok here is what you should be asking yourself :  Why are we not suffocating ???

We are burning oxygen with coal and petroleum constantly.  CO2 is being added into the system by burning and in fact by you breathing.   The trees can not do anything to alter CO2 levels on balance for every tree breathing out Oxygen right now there is another one rotting on the ground putting out an equal amount of CO2 effectively removing trees from the equation.

Therefore there is another environmental source of production for oxygen.  Its not anything I see on land.   The only logical conclusion is that its in the Oceans.  Since CO2 has not really changed very much over the past century.  You can see that on the graph below. 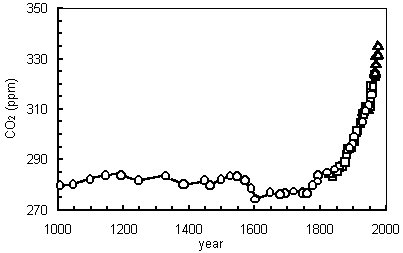 The global warming con-job crew has tried to gussy up this graph by starting at a non-zero y-axis point. Because of this it appears we are going from zero up fast to some level.  However its NOT starting at zero.  Its starting at 290 parts per million CO2.  Therefore the atmospheres CO2 levels ( if we can trust the graph since its from one of the global warming sham sites ) have only increased on the order of 20%.  In addition to this on an absolute measure CO2 has only gone up 60 parts per million.

When you realize how little CO2 there really is in the air and how little it has changed you have to realize there is VERY powerful oxygen generator somewhere.  Its in the oceans.  I do not know exactly what it is.  However I do know that mathematically it has to be there.  I also know that it is not just something that is alive then rots away like the tree upon death.

Yes there is something in the ocean that is sequestering carbon in large amounts and is very effective at it. I also suspect that the more CO2 that goes into the oceans the faster it sequesters.   This is because the first step in the sequestering almost has to be some sort of photosynthesis.  CO2 is the ash of carbon burnt with oxygen.  In order to separate C and O2 back into constuent elements energy must be added.  The rate of photosynthetic production of oxygen goes up with rising levels of CO2.  This is why people who grow pot buy tanks of CO2 and feed it into their indoor growing areas. Arty on how to grow marijuana faster using CO2

The above argument coupled with the simple fact that the most potent green house gas in the atmosphere is WATER VAPOR! ……leads to the very evident conclusion that global warming is nothing but a scam.  It can not possibly be a real phenomenon.

There is one source of global warming that you can see every day.  Its the great big fireball in the sky called “The Sun” . It does indeed cause global warming.  If there is any real measurement of average temperature rising it can only be blamed on the Sun.  It is not constant in energy output.  It fluctuates.  It will grow old and die at some point along with most if not all life that is still on Earth.  Its hard to fathom for the non-scientist but it does change and will continue to be the cause of hot and cold spells on Earth.

The above argument suggests we should not be worrying about CO2.  It does suggest we should keep an eye on the oceans. Er well, but then how will we ever get any unbiased data.  The Fear Factory will never allow it!