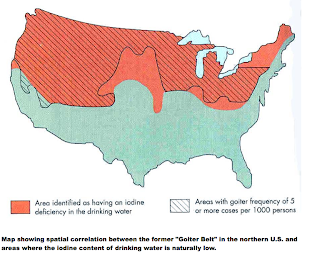 Scraped from the article linked #2 above.

The medical world has known about this belt for over 50 years, and they're attributed it to low iodine content in the soil. A lack of iodine in the diet causes low thyroid and goiter, which is simply swelling the thyroid gland. The problem with this old hypothesis about the connection between iodine and goiter is that the US has required for years that all salt in the Great Lakes Region contain supplemental iodine, yet the incidences of low thyroid across the US have not dropped as significantly as expected. Hypothyroidism is still a prevalent problem across the entire US and not only in the goiter belt. There must be some or many other factors contributing to this problem. Researchers most recently blame two things for the hypothyroidism epidemic: chemicals/toxins in the water and soil and low content of other essential minerals like selenium in our soil. Over the years, we've either released (through mining and other practices harmful to the earth) or disposed of harmful chemicals into our soil and water. Coal-mining produces dihydroxybenoic acids that lower thyroid function. Any water and soil in areas of the US near coal mines probably contains these toxins (Stephen E. Langer, Solved the Riddle of Illness). The CDC has done studies showing that perchlorate, a toxin from (of all things) rocket fuel is showing up in the soil of California primarily in higher than safe concentrations. This toxin actually damages the thyroid. Fire-repellant/retardant causes thyroid problems in cats, and probably in humans as well although I haven't found a study to support it. In the end, it's really hard to diagnose what is causing the thyroid problems because it could be any number of chemicals from any number of sources. Sometimes, it's simply necessary to take medication to counteract the effects of these and other unknown toxins. The second blaming factor for hypothyroidism in the US is the lack of other essential minerals and vitamins in our soil and our diets that make it impossible for our bodies to convert T4 into T3 and other usable forms of thyroid hormone. Dr. David Brownstein gives a short list of these in his book Overcoming Thyroid Disorders: some of the lacking minerals and vitamins are iodine, iron, selenium, zinc, vitamin A, vitamin B2, vitamin B6, vitamin B12. As much as the FDA doesn't like the idea of people using vitamin supplements, in some regions of the country, it may be necessary to make up for soil depletion. I wish there was an easy way to find out which vitamins and minerals your soil is lacking, but I don't think there is. It might be best just to supplement, but look up the problems associated with taking too much of any one of these vitamins/minerals and notice if you start having any of those symptoms. Remember, taking too much of any vitamin or mineral is as bad as not having enough. Too much iodine can actually cause thyroiditis.

What is metabolic Endotoxemia?

The spectacular role of the human microbiome in preventing metabolic endotoxemia, the number one cause of mortality worldwide. Metabolic endotoxemia is essentially an innate immune response that becomes a sub-clinical, persistent, lowgrade inflammation because of increased, Read more…