The Vulcan Candidate, Are we going to see more of Kucinich? Appears we are, Beam me up! 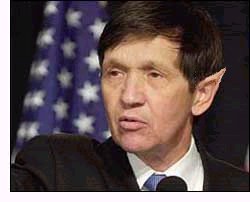 –I’d worry about hate mail from Kucinich supporters but Vulcans don’t have emotions do they?—

When the democrats say they are going to push a “progressive” program you can let your mind replace the word automatically in your head with antique, regressive and thoroughly bone-headed.

Over the weekend, the National Conference for Media Reform was held in Memphis, TN, with a number of notable speakers on hand for the event. Rep. Dennis Kucinich (D-OH) made an surprise appearance at the convention to announce that he would be heading up a new House subcommittee which will focus on issues surrounding the Federal Communications Commission.In addition to media ownership, the committee is expected to focus its attention on issues such as net neutrality and major telecommunications mergers. Also in consideration is the “Fairness Doctrine,” which required broadcasters to present controversial topics in a fair and honest manner. It was enforced until it was eliminated in 1987.

Just to refresh your memory the letting the fairness doctrine go by the boards is actually what allowed us to actually have a debate. Before Rush Limbaugh we were force fed a steady diet of socialism/communism by ABC-CBS-NBC.    As he says he is the fairness doctrine.  To follow up on the point Fox News is only considered conservative by the same people who thing ABC-CBS-NBC are not liberal commy strongholds!  Believe me if they hire me at Fox News these people would have a valid point.  There would be a few very noticable changes in tone.  Fox plays the middle of the road to maximize their revenues.   What gallls the libs so badly is that Fox actually draws the viewers more than CNN verifying that indeed CNN stands for the Communist News Network.

In honor of Dennis K. making his grand en-trance upon the national stage I thought I would let you know what I really think about him.  Well here it is in photos and words.  I think this flake would look more at home in the skin tight 100% polyester shirts of the old Star Trek TV series.   In fact I think if you read this you should consider sending him a replica momento from the series such as an autographed ( fake of course ) picture of Leonard Nimoy or a plastic phaser toy.  I have reason to believe on hard evidence from Coast-To-Coast A.M. that Denny is a Klingon mascarading as a Vulcan.   Ok all joking aside this guy just strikes me as a cross between namby-pamby effeminate and just plain weird.  He’s Spoke without the clear headed logic or the super human manly strength. What kind of Spock is that ?! Nutless Spock for short.

Send your Phaser Toys, Spock Pictures or Nudies of Ahura to any of the following addresses:

I knew guys in high school that would have given their left testical to look like Spock…….but this guy looks like he gave BOTH !