Video: Castles episode #1: How to supplant a ruling class – A historical guide to the stroke of state – coup d’etat

This is episode 1 of the series on English castles.  Castles were most useful shortly after the 1066 Norman invasion of England.   They were called "mottes and baileys".  Shown in the picture below the motte is not the ditch around the hill but the hill.  Perhaps that is how the word moat got its start. 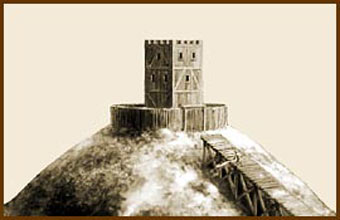 Imagine you had 30,000 men and you wanted to conquer an island nation of 4 million people.  What would you do?  A direct warfare would not result in the outcome you want.  You need to supplant the existing ruling class.   To start off with you invade and run the land based equivalent of an aircraft carrier.   You base your cavalry in a motte and bailey and now you can control a radius of about 30 miles around it.   But how does this large earthwork get built ?  It is a significant hand dug affair.   You use local labor.   You see the passive underclasses are unlikely to put up significant resistance against you and they are susceptible to being paid by the invaders.   People while being different are mostly the same and thus once one ruling class replaced by another the governed do not sense much difference between one overlord and another.   If you watch the rest of the videos you will note the progression of the "castle" from a very practical tool of conquest to that of status symbol of the posh snobby elite of England.   The assymtotic behavior of england was to welcome its invaders.  As this occurred the castle became the object of the social climber’s compulsions.

Having been treated to a taste of the rather posh english attitude here in Brazil by some upper crust students from England I found it immensely interesting to watch the entire series.       The students observed where ones with whom money is no object.    They were stumped by my friend Pedro’s need to watch his money and avoid spending too much.   One fellow insisted on being called "David".  When I lapsed into American behavior and called him "Dave" ….he promptly said "MY NAME IS DAVID".     There was an interesting dynamic I observed.   One of the English students was from the "commoner" class.   When she was alone she was quite charming and confident.   When with the posh students from England she "shut down" for lack of a better word.    Hugo was one of the posh students was friendly but was from the upper crust still and a socialist / leftist.   I do not have the heart to tell him but there is hardly a more morally superior attitude to assume than to be a rich upper crusty person who is a socialist.

Barack Obama’s form of motte and bailey takes a different form.   He supports a ruling class by printing up money and feeding it directly to the lords of the manner.   When a commoner makes bad decisions he has no protective structure as a B.O. monetary motte and bailey.  Contrast that with members of the ruling elite.   Surely not everyone is saved by the financial motte and bailey system but many are.   Its not democracy you are experiencing.  Its conquest.