Original Arty exerpt below in bold 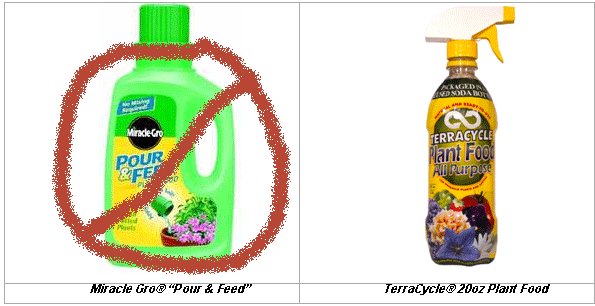 Anti Capitalist product, do not use!                  Buy this instead !! But Scotts sees similarities between the two plant-food makers. So, the Goliath of plant products sued late last month, accusing TerraCycle of copying its look and falsely claiming that its organic products are better than synthetic ones like Miracle-Gro. In order to make my point in regarding this article I want to first make it clear I am not a believer in Man Made Global Warming  ( MMGW ).  I have extreme skepticism about anything that comes out of the green lobby money machine.  Terracycle appears to be a company that plays some of the same schemes and themes of the green movement.    That being said, for Scotts Miracle Gro to bring a lawsuit over usage of similar colors or advertising claims is a mickey mouse-(tm) things to do.  ( Will Walt-Disney sue me for that reference?!!! )  1- similar colors – ok so like I invented the particular shade of green, so both companies owe me royalties!  If color schemes can be claimed in a proprietary fashion we're ALL going to owe the gays a truckload of money!!! 2- advertising claims?!!!  – If we sue every time an advertiser makes unsubstantiated claims we are ALL going to be in the poor house. In the case of the claims by TerraCycle: My experience with fertilizer teas is that if you allow a healthy bacteria growth in the tea that for some reason the plants are markedly more vigorous.  Of course this is in Arizona soils which are definitely more steril than midwestern soils.  However I can say in at least the Arizona situation that Terracycles product is likely to be much more effective a product if its not pasteurized.  ( I assume not since its not for human consumption! ….although I wish the Scotts Miracle-Gro CEO James Hagedorn  would grab a bottle of TerraCycles Worm Poo Tea and chug it post haste.  His herd of lawyers should follow suit ! I won't be buying any more Scotts products until and only if Scotts reimburses TerraCycle for all costs they have incurred due to Scotts Miracle Gro's suit against them. I am an ultra-capitalist as you reading this should be.  It is the most efficient ecological protection mechanism that has ever been created.  You may not understand this now but you will someday.  This principle will be hammered again and again as we proceed into the future by forces more powerful than any one person or group.

Update:  Terracycle settled by changing packaging and stopping claims of being better than MiracleGro.

Here’s a link to TerraCycle’s appearance on BBC World News regarding the lawsuit with Scott’s Miracle-Gro.. check it out!

I have sent TerraCycle a contribution to help out the legal people. I would like to find Sotts email address to send them a “shame on you” message. They have stepped over the line on this one and it will bite them in the ass.
“GREED”
ddc

Please please please….. get a life!! Its obvious they copied them!! The packaging you chose to display is the worst example, They tried to cheat and got caught! TOUGH!!! Grow up , you wont become a big company if you are not original!!

You can’t copy a color scheme. If one could then I will set my computer about systematically selecting them all and forcing you all to pay me royalties. Miracle Gro is using anti capitalist techniques. For this they can forget about my business.