This was one of the computers This was my first deal where I was trying to make a buck on my own.  So I ended up with all this stuff piled up in the garage and now needed to sell it!  One of the more memorable encounters selling this stuff was with Carlos Coquet the Computer Maverick. 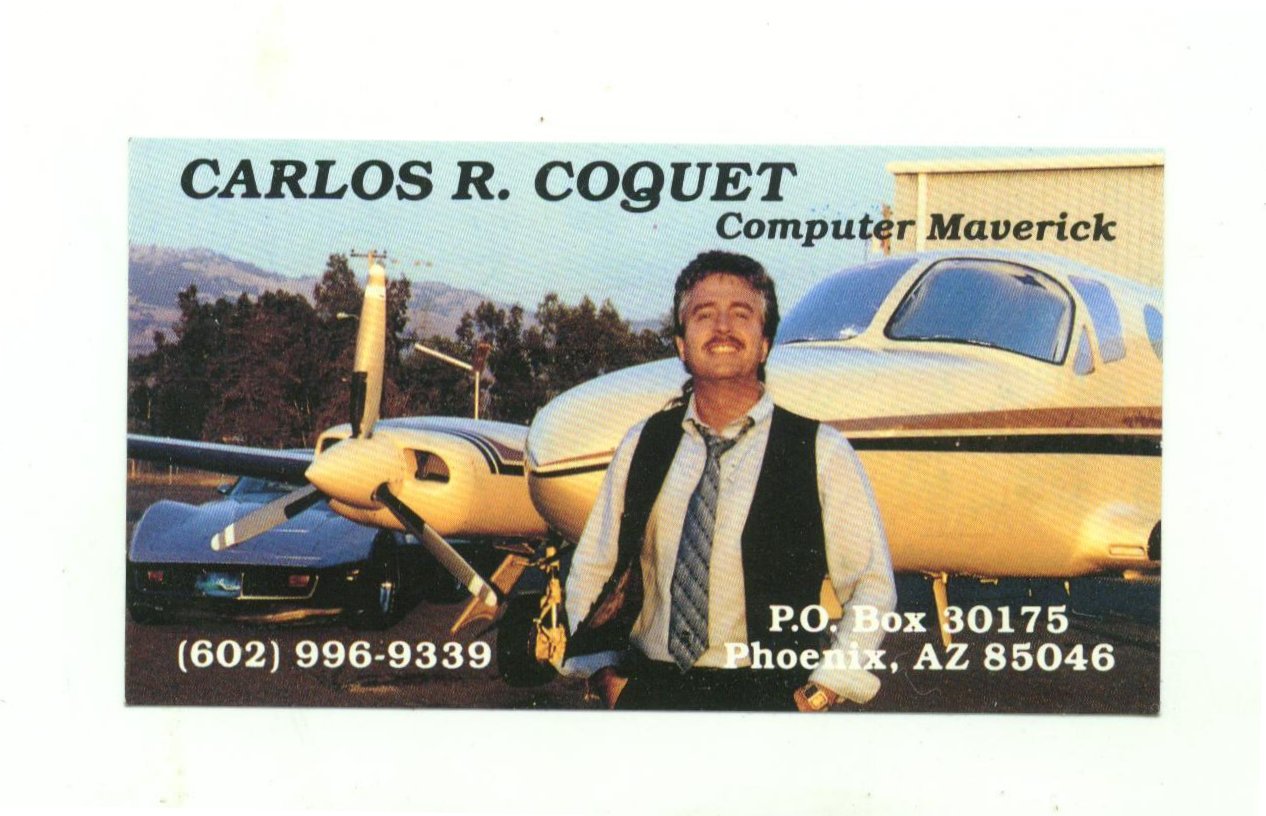 Carlos' business card.  Colorful character, colorful card He called up and got directions.  He was driving from North Scottsdale to Litchfield Park Arizona.  It took him about 50 minutes to drive there.  I had listed the computer for 120 dollars but he did what everyone tries to do when they buy secondhand…they try to finagle a lower price.  Carlos: I am looking at this computer and I think I could not possibly pay more than 80$ for it. Me: Well … I have another guy coming to see it tomorrow night.  If he does not buy it then you can come back and buy it. Carlos: Ooohhh the drive here was so long.  Alright I will give you the 120. Me: chuckling inside and thinking..there was not another person coming to look at the computer.  But finally the endless ripping I had been sustaining as a novice seller had come to an end.  I had finally learned a little deal jujitsu.

Sonofa! After receiving the comment below regarding calling the number I googled Carlos and found his website:

… I still do not exactly know what a computer maverick is but that is 95% of the fun.

UPDATE:  As you will see below a couple of people below have reported Carlos has passed away.   Some commenters had criticized me for placing his card here with his information.  I no longer have any self doubt about this.  My heart is warmed by the people who left comments regarding his passing and how they miss him.  It's interesting how the really good people can pass through your life very rapidly and leave a trace that in the end increased my humanity.  Carlos we miss you.

Great. I was looking for a topgun like him. I figured if he flies what’s on his card he must be doing well in computers!! I called him and he still has the same phone number.

REALLY?????!!! WOW. That is from a LONG time ago. LONG LONG time ago. I figured the number would be long ago changed. Why did you call him? Just curious. He was an interesting character.

Boy!! This guy was ahead of his time with that name! If he is still using that title he must be getting a lot of attention with McCain and Palin popularizing the term “maverick” so much. I got to this page via Google searching on McCain and Maverick (both of which are in this page). I am not sure what the point of this post was but another hit shows Mr. Coquet recently contributed at least $1,000 to the McCain campaign so he must not be doing too badly in his trade!! (Well, from the looks of his aircraft, he was not doing badly back then and computers are much more in vogue nowadays!!)

He is quite a character. I liked the guy. The point of the post is it was very entertaining encounter I had with him. Also some personal education. Er and yes sometimes I like injecting extraneous thoughts into the internet bloodstream.

so this is the maverick, not McCain huh? . . . this particular post is so out of line with the mccain stuff up above (and everything else in the page) that I showed it to my husband (a psychiatrist), and he said that if you were under the influence of drugs or alcohol when you concocted this, fine. if you were not, you may suffer from a chemical imbalance that CAN be treated. a normally functioning mind would not present in such detail, (pictures, addresses, phone numbers), such an insignificant event from 16 years back in the midst of all other blogging here which could be deemed ‘normal’. it REALLY stands out from the rest in this blog as a mental aberration. does this guy know you put this b s here ???????

The phone number is public information and indeed still valid on his website. I like Carlos and if I had thought it would be an annoyance to him I would not have included it.

As for the psychiatrist or as many call them “the loon that went to school to solve his own problems” I take your comment as a compliment.

So far all I can tell is 2 people who wanted to do business with Carlos got to connect with him.

I know some good doctors you could go to for corn cob extraction if you would like the phone number for them I’d be happy to forward it to you.

YOU HAD MY HEART WITH YOUR STUFF ABOUT MCCAIN PICKING “BROWN” BUT YOU LOST ME WITH THIS STORY ABOUT THE “MAVERICK”. I AM A PROFESSIONAL SALESMAN AND I FIND IT SAD THAT YOUR STORY CONVEYS YOUR FEELING THAT LYING IS A GOOD SELLING TOOL. YOU SEEM TO BE PROUD OF YOUR “BACKGROUND” SO MUCH SO YOU ARE STILL TELLING THE STORY ALMOST 2 DECADES AFTER THE FACT. GOOD SALESMEN DON’T LIE, THEY HIGHLIGHT THEIR PRODUCT AND WHAT IT WILL DO FOR THE BUYER. IF I HAD STARTED LIKE YOU, I WOULD HAVE BURIED IT SO DEEP IN MY MIND I WOULD NOT EVEN REMEMBER IT, LET ALONE PUBLISH IT!!! YOU MUST BE A VERY SMALL PERSON.

TakeAway Lesson: I can use any excuse for the answer NO I damned well please. NO is still NO even if it is because the martians are attacking.

This episode was my first foray into selling and I was being shellacked. I would advertise things at 1/10 cost and the prospective buyer would show up and offer 1/2 of that! I had to do something. In the end its not truly lying in my opinion as I am under no obligation to sell at 1/2 price agreed to on the phone. If I refused to sell at the price originally listed in some sort of bait / get them over to look / then switch I would be able to agree that is was unethical. However for me to say I had another buyer to me I feel is just a politic way of saying “NO THANKS” to 1/2 price offers.

In fact I’m proud of learning the lesson and then passing it on to others who need to learn how to sell. This is a good lesson to the “too nice” people of the world how to be more assertive.

I am actually surprised you can’t see ethics is not a factor when I am under no obligation to sell at 1/2 discussed price! I’ll make sure to ask for 1/2 price from you if we ever do any deals!

you are about as right on this as you were on McCain picking the “brown” guy. he picked Sara and that was fantastic. on this, 80 is not half of 120!! nor did the article say he had AGREED to 120. so you are also a poor writer. hope you did not write any more articles on selling !!!!!!!!

;*- I am very thankful to this topic because it really gives up to date information ‘.”

Carlos was a pioneer in computers, he started working with computers in the late 70's, he was a prestigious technician for XEROX COMPUTERS, and he was traveling all around the world, fixing computers for important companies and banks earning a crazy amount of money, He was my landlord in Phoenix(He owned a couple of properties) but sadly passed away in late 2011, he was sick of cancer and he was expending around 18 grands a month in treatments, but sadly it didn't work, I told him about Jesus and when he passed away, they founded him praying on his knees, he was a really good person, and really funny character, hard to find such a good person like him, R.I.P. Carlos. If you wanna know more about him you can email me. Thanks.

Very sad to hear about Carlos passing. I remember him after all this time. He was a good guy.

This is very sad news. I was good friends with Carlos and met him in Binghamton, Ny in 1989. We had a lot of fun. He had a corvette at the time and I used to help him fix it. We used to hit the town back in the days and chase the "Chicky Poos" as Carlos referred to the ladies. God Bless you Carlos. Ill seeya up there my friend.

People keep popping up who knew Carlos.  It’s quite heart warming to see.  He was a good guy and probably would be happy that I made a blog entry and you are commenting about your experiences with him. I notice all the “do gooders” who lectured me about his address and my sales techniques no longer show up. Only the people who cared about Carlos. I no longer doubt my having put this card up on this blog. Thank god I did because at least I could know more about this person who made such an impression.