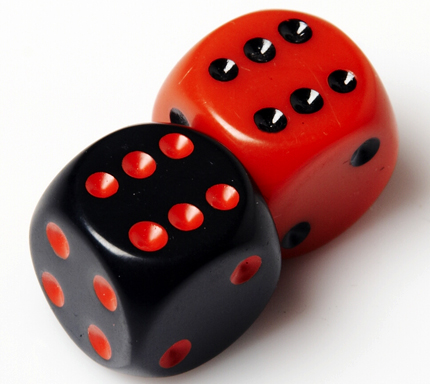 In a previous article entropy was defined as the expected number of bits in a binary number required to enumerate all the outcomes.  This was expressed as follows:

In physics ( nature ) it is found that the probability distribution that represents a physical process is the one that has the maximum entropy given the constraints on the physical system.   What are constraints?  An example of a probabalistic system is a die with 6 sides.  For now pretend you do not know that it is equally likely to show any 1 of the 6 faces when you roll it.  Assume only that it is balanced.

In the case of a die the above summation is equivalent to the following sort of computation:

Let us use our common sense now.  We know there are 6 equally probable states that can roll up.  So its easy to calculate the number of bits required.

Thus we can see our initial assumption of probabilities yields an entropy number less than we would expect from common sense.   How do we find the maximum entropy possible?

The langrangian is formed as follows:

solving for the Pi  yields

All the Pi= the same constant with the probabilities summing to 1….Thus Pi=1/6 since N=6

While this is alot of work to derive the obvious it there is a purpose. In the case of more complicated situations where the probability distribution is not obvious this method works.  For example in the case of the Black Body emission curve of Planck.  Given just the quantization of energy levels you can derive the black body curve!!  This principle is woven all through nature.  Learn it because it will serve you well.

Some interesting Notes to myself — myself? I meant me.

Morse code is made up of dots and dashes which can be thought of as 1's and 0's. Morse Code is encoded along the lines of a Huffman code and thus one has to wonder Read more…

Vigenère Cipher And Breaking it